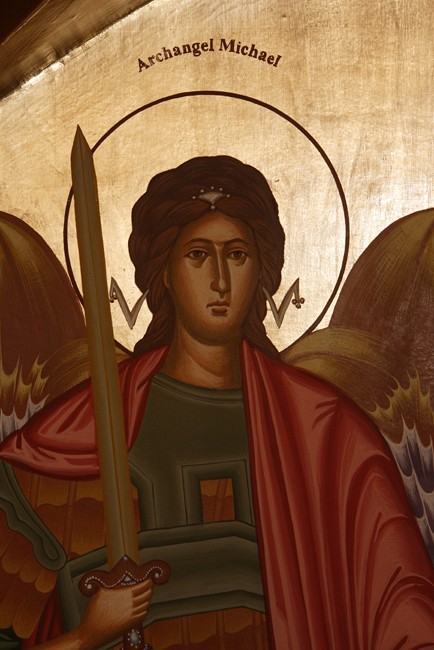 St. Michael, the Archangel, whose name means “He who is like God,” is the Chief Commander of God’s angels. Archangel Michael brought down from Heaven the arrogantly proud Lucifer (Satan) and the other fallen spirits, when they rebelled against God. During the Exodus of the Israelites from Egypt, Archangel Michael went before them in the form of a pillar of cloud by day and pillar of fire by night after annihilating the Egyptians. Archangel Michael appeared to Joshua and revealed the will of the Lord at the taking of Jericho, as well as in the annihilation of the 185 thousand soldiers of the Assyrian emperor and also in the protection of the Three Holy Youths: Ananias, Azarias and Misail, thrown into the fiery furnace for their refusal to worship an idol. Through the will of God, the Chief Commander Michael transported the Prophet Habbakuk from Judea to Babylon, to give food to Daniel in the lions’ den. The Archangel Michael disputed with the devil over the body of the holy Prophet Moses. Archangel Michael and the other Heavenly Hosts are commemorated on November 8.