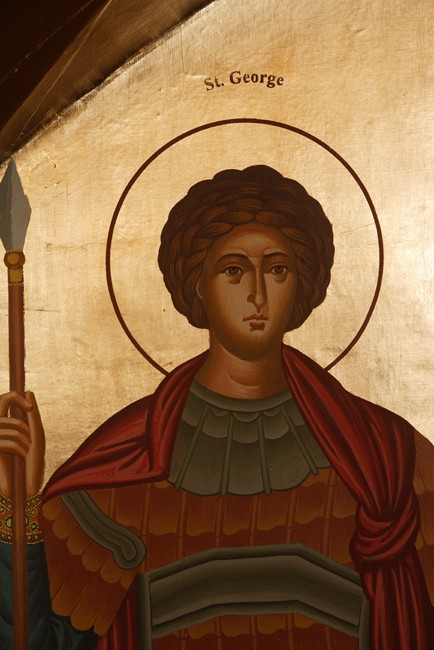 St. George, was born in Beirut in the late third century and grew up in Palestine with his mother after his father was martyred for Christ. Near Mount Lebanon, St. George rode up on his white horse and making the sign of the cross, pierced the throat of a serpent who was devouring the inhabitants. Over twenty-five thousand men were baptized on account of his witness. St. George, a military commander, rejected the Emperor’s decision to persecute Christians, distributed all his wealth to the poor, freed his servants, and then appeared in the Senate, confessed himself a Christian, and appealed to all to acknowledge Christ. Diocletian then had St. George tortured and many miracles were done, including St. George raising one from the dead. St. George refused the Emperor’s offer to make him second in command if he would offer sacrifices to the idol and was beheaded after asking God to forgive his torturers. His relics were placed in St. George’s Church in Lydda in Palestine, while his head was preserved in Rome. St. George is commemorated on April 23.