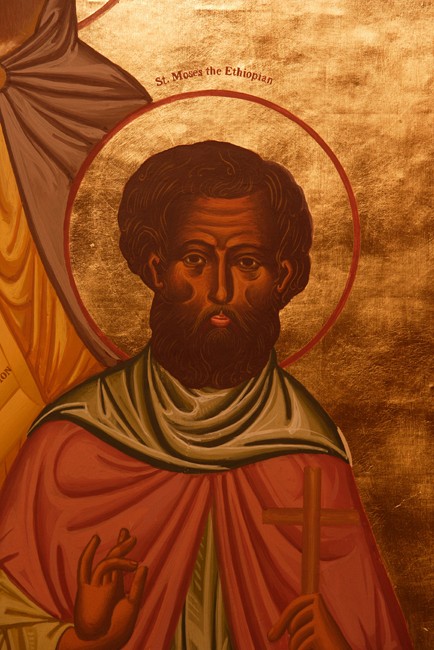 St. Moses the Ethiopian was an Ethiopian who lived in late 4th century Egypt. Moses was changed one day when, at age 40, he and his group of 75 robbers attacked a monastery, intending to rob it. He was met by the abbot, whose peaceful countenance and warm manner overwhelmed him. He immediately felt remorse for all his past sins. Sincerely repenting, he begged to remain at the monastery. Ultimately, his whole band of robbers repented and became monks. He was continually tormented by his past ways and the demon of lust and was tempted to return to his old ways. Through the prayers of his abbot, St. Moses was miraculously healed. Near the end of his life, he was ordained priest, and founded a monastery of 75 monks -- the same number as his former group. In 405 A.D., at age 75, Moses suffered a martyr’s death, when his monastery was attacked by a group of fierce barbarians. He prophesied concerning his own death telling fellow monks on the day of the raid, “All who take the sword, will die by it.” St. Moses the Ethiopian is commemorated on August 28.