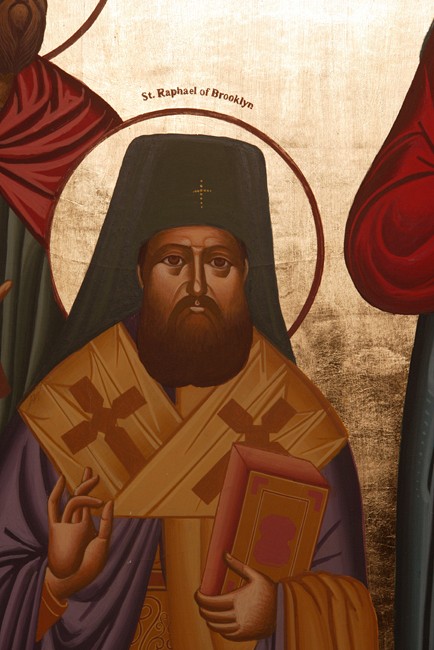 St. Raphael, Bishop of Brooklyn was born in Beirut, Lebanon in 1860. Attempting to free the Church of Antioch from foreign domination, as a priest under Antioch, he ultimately was allowed to transfer from its jurisdiction to the Church of Russia and remain there. In 1895, St. Raphael was invited to New York by the Arab Orthodox community to be their pastor. Saint Raphael undertook several pastoral journeys across the continent, visiting dozens of cities and towns between New York and San Francisco, spreading the Word of God, celebrating the sacraments, building churches, finding educated laymen for ordination, and building communication in the Church through Al-Kalimat (the Word) Magazine. He was made a bishop by Moscow. Canonical and organizational unity existed in fact in America until the First World War and the Russian Revolution of 1917 since the Russian archdiocese was the only organized Orthodox presence and most Orthodox in America, whatever their ethnic character, looked to the Russian Archbishop for pastoral care. The Orthodox Church in America canonized St. Raphael on March 29, 2000. St. Raphael is commemorated on February 27.